Home > What we treat > The Hip Joint

The hip is the largest weight-bearing joint in the human body. It is also referred to as a “ball and socket” joint and is surrounded by muscles, ligaments, and tendons. At the top of the femur (thigh bone) is the femoral head (ball). The femoral head fits inside the acetabulum (socket), which is an important part of the pelvis bone. The pelvis is a large, flattened, irregularly shaped bone, constricted in the centre and expanded above and below.

The femoral head and acetabulum are coated with smooth articular cartilage (joint surface) which cushions the bones and helps them to rotate more easily within the socket. Bursae, fluid-filled sacs, cushion the area where muscles or tendons glide across bone.

Around the edge of the acetabulum is a rubbery rim of tissue called the labrum, which deepens the hip socket and protects the joint surface. The hip joint itself is completely enclosed in a tough layer of tissue called the joint capsule. The joint capsule keeps fluid inside the hip joint and lubricates the joint which further reduces friction and facilitates movement. The hip also contains a ligament known as the ligamentum teres, which connects the femoral head to the acetabulum. 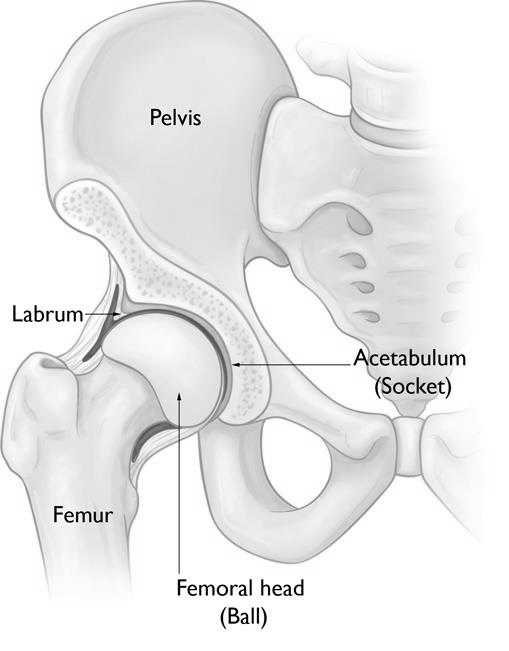