Home > What we treat > The Shoulder Joint

The shoulder is a ball-and-socket joint and has the greatest range of motion of any joint in the human body. The bones of the shoulder are the humerus (upper arm bone), clavicle (collar bone), and scapula (shoulder blade). The head of the humerus bone (the ball) is lined with cartilage that glides over the glenoid (the socket) to form the glenohumeral (GH) joint. The clavicle attaches the shoulder to the rib cage and holds the shoulder out from the body. The scapula is a large triangular bone located on the back side of the upper body, and it is connected to the clavicle through the acromioclavicular (AC) joint.

In the shoulder socket, the head of humerus sits like a golf ball on a tee and is supported by a complex arrangement of muscles, tendons, and ligaments. The rotator cuff is a group of tendons that attach four muscles from the scapula to the humerus. These tendons help to keep the humerus bone in place within its shallow socket, and to allow significant movement and joint flexibility. The rotator cuff muscles are called the Supraspinatus, Infraspinatus, Teres minor and Subscapularis. The strong chest wall muscles (Deltoid, Pectoralis major, Latissimus Dorsi) and arm muscles (Biceps, Triceps) provide additional support and strength to the shoulder joint.

The AC joint is supported by ligaments between the acromion, clavicle, and coracoid process. The other end of the clavicle is attached to the breastbone (sternum) and forms the joint called the sternoclavicular (SC) joint.

A cup shaped rim of cartilage that effectively deepens the GH joint is called the labrum. The labrum is attached to the edge of the glenoid, and the humeral head and glenoid are covered in a smooth, gliding surface called articular cartilage (joint surface). Attached to the labrum and the side of the glenoid is the shoulder capsule. The capsule is made of tissue surrounding the GH joint which has several thickened areas called ligaments. The capsule normally has sufficient laxity to allow shoulder motion but is in place to prevent excessive shoulder movement.

There is an area beneath the acromion and above the top of the humerus called the subacromial space. In the subacromial space sits the rotator cuff tendons, and above the tendons, a structure called the sub acromial bursa. The bursa is a fluid-filled sac which assists in shoulder function by reducing the friction between the underlying tendon and the bone of the acromion above. 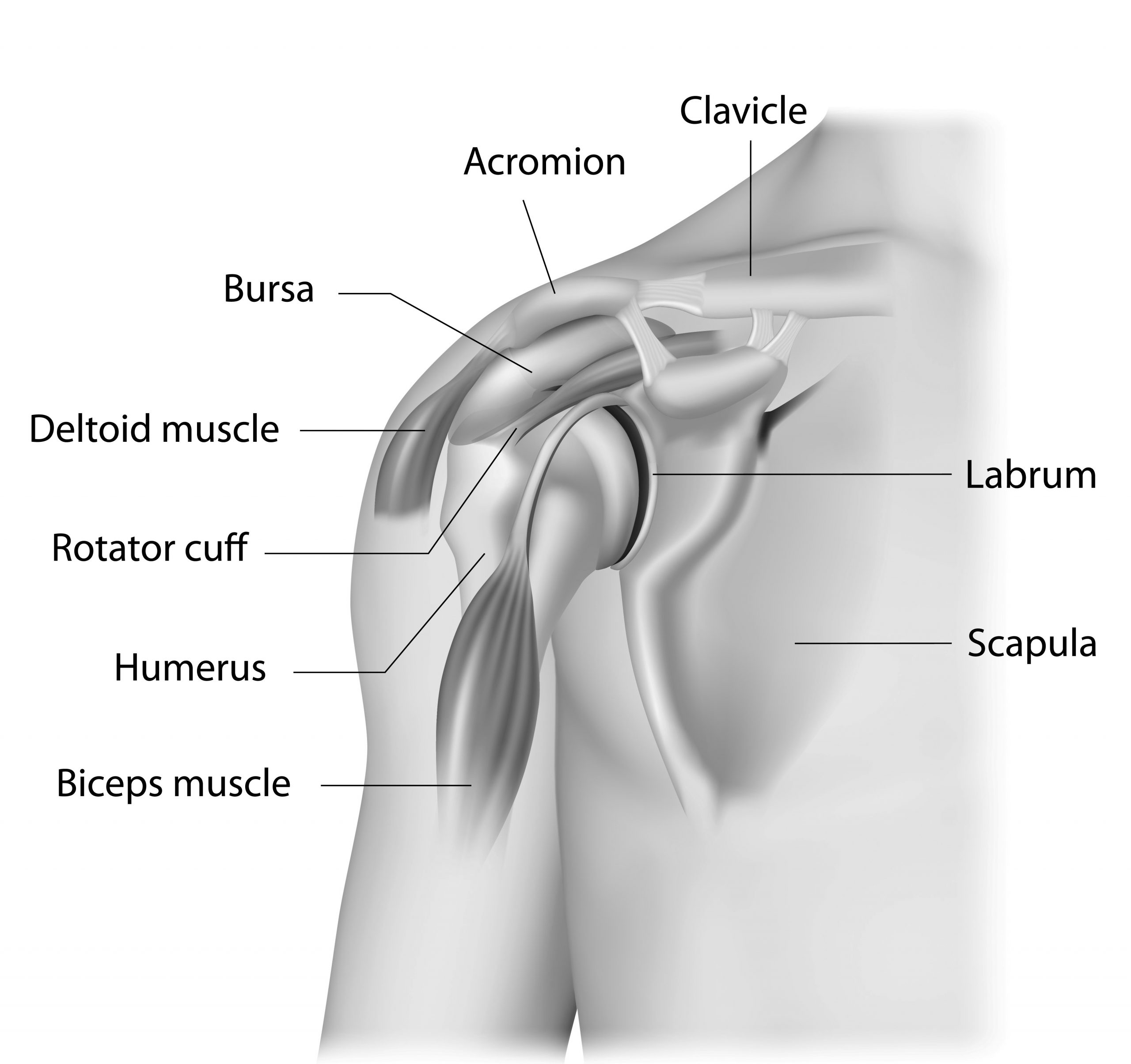 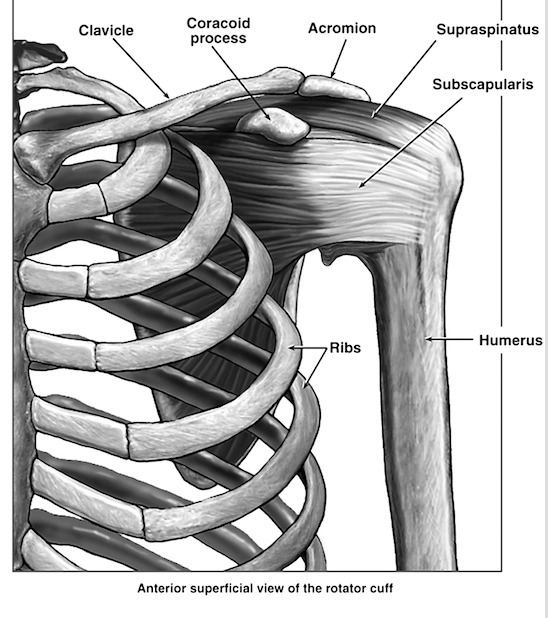 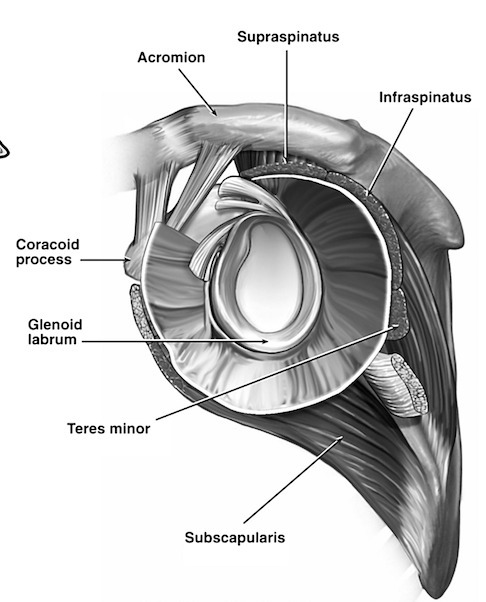 Rotator cuff pathology Is the most common groups of conditions affecting the adult shoulder.

The rotator cuff is comprised of four muscles (supraspinatus, infraspinatus, teres minor, and subscapularis) and works in conjunction with the scapular stabilisers to keep the shoulder joint in the socket, while achieving a full 360-degree range of motion. When injury to the rotator cuff occurs, there is a disruption of this dynamic, which often results in pain and loss of movement.

Injury to the rotator cuff is commonly classified into one of two groups:

There are two common types of tear, being a Partial tear and Full-Thickness tear:
Partial tear: damages the tendon but does not completely sever it.
Full-thickness tear: separates all of the tendons from the bone.

There are two common causes of rotator cuff tears – Acute and Degenerative:
Acute tear: occurs due to an injury, i.e. following a fall or shoulder dislocation or during sports
Degenerative tear: resulting from a wearing down of the tendon that occurs slowly over time. This degeneration naturally occurs as we age.

There a number of symptoms caused by rotator cuff tears, including:

Diagnosis is made through a combination of clinical examinations and investigations such as X-ray and often an MRI scan.

The primary aim of treatment is to restore function and reduce pain in the shoulder and conservative management is very effective for a number of patients with rotator cuff tears. This management comprises of rest, modifying your activity and a phased strength and range of motion program.

The recovery time will differ significantly between patients but is generally expected to take between eight weeks and three months, depending on age, functional ability and the extent of the damage.

Surgery is sometimes an intervention for management of rotator cuff tears in the following circumstances:

Surgical intervention involves the surgical reattachment of the torn tendon back to its origin, which is commonly on the humeral head.

Surgery is followed by a period of six weeks immobilisation in a sling, followed by a further six weeks of activity modification before you are cleared by your surgeon to perform a Range of Motion (“ROM”) and strength-based rehabilitation program.

You are often unable to drive for six weeks or longer, depending on the arm affected and the type of car you drive. People who work in physical roles such as trades and farming will require a significant period off work, which your surgeon will discuss with you. We aim to achieve full function between nine and twelve months following surgery.

Shoulder instability often results in damage to the structures that help to support the ball in the socket, such as the ligaments and tendons around the shoulder joint. This results in the loosening of the joint, which can lead to more episodes of instability. Each time you experience an instability episode, you risk damaging the joint structures further.

Your risk of further instability episodes is also dependant on your age, activity levels and genetic ligamentous laxity.
Examples of people who are at higher risk of suffering reoccurring shoulder instability:

Commonly, patients with instability suffer from the following symptoms:

Diagnosis is made through a combination of clinical examinations and investigations. The clinical examination involves a detailed subjective history on the mechanism of injury or injuries and clinical tests examining range of motion and the integrity of the ligaments.

An X-ray will be obtained to examine the shoulder joint position, and an MRI is also often obtained to confirm the diagnosis and to identify whether there is any other damage to the surrounding structures.

For the majority of patients that have suffered their first instability episode, surgical intervention is often not required, and they will just need to undertake conservative management.

Non-surgical treatment initially consists of activity modification and RICE (rest, ice, compression, elevation) to restore full motion and reduce pain. Once you can move your shoulder pain-free, a targeted strength program will be undertaken to strengthen the supporting structure of the shoulder.

Timeframes for returning to activity will differ significantly between people, but will generally range from six weeks to three months. The primary aim is to reduce pain, restore function and strength in the shoulder.

Surgical intervention is required in the following instances:

Surgical intervention is aimed at restoring the stability of the shoulder joint and often involves repairing or reconstructing the support structures of the humeral head (ligaments and capsule). This can be done through open surgery or by arthroscopic (keyhole) techniques. Particularly in the collision athlete our surgeons favor open surgery as our results support this as a more successful technique.

Following surgery, you will often be in a sling for six weeks to support the healing of the repaired structures. Once cleared by your surgeon, you will then start a functional rehabilitation program focusing on regaining the movement in your shoulder, muscle strength and control.

You will often be unable to drive for up to six weeks, depending on the arm affected and the type of car you drive. People who work in physical roles such as trades and farming will require a significant period off work, which your surgeon will discuss with you. Return to full activity following surgery typically takes between six and eight months.

Acromioclavicular (AC) injuries are common shoulder injuries generally caused by acute trauma. The AC joint is formed by the acromion (on the scapula) and the clavicle and is supported by the ligaments between the acromion, clavicle, and coracoid process. These ligaments help to maintain the stability of the joint and hold the joint in place as we move our arm. Injuries to the AC joint causes disruption or separation of the AC joint and damages the supporting ligaments.
Injuries to the AC joint commonly occur due to a fall onto your arm or a direct blow to the point of your shoulder, which can usually occur whilst playing contact sports. The severity of the injury is dependent on the force put through the joint and can range from:

Depending on the severity of the injury, you may notice a lump or deformity over your AC joint caused by the clavicle becoming prominent.

Diagnosis is made through a combination of clinical examinations and investigations. The clinical examination involves a detailed subjective history on the mechanism of injury and clinical tests examining the range of motion, ligaments integrity and pain on palpation.

X-ray will often be attained to help diagnose the grade of the injury.

The primary aim of treatment is to restore stability and function and to reduce the pain around the AC joint. Conservative management is very effective for a number of patients with AC joint injuries and this will usually comprise of RICE (rest, ice, compression and elevation), activity modification and a phased strength and ROM (Range of Motion) program.

The time taken to improve function and return to activity will differ between people. However, it is expected that injuries receiving conservative management will take between four to eight weeks to fully recover.

Surgery may be considered appropriate for the following patients:

Surgery aims to restore the stability of the AC joint and the ligaments surrounding the joint.

Following surgery, you will spend two to four weeks in a sling to help protect the repaired joint. Once cleared by your surgeon, you will then start a functional rehabilitation program focusing on regaining the movement in your shoulder, your muscle strength and control.

Your return to full activity will depend on your functional progress, but often will occur between three to four months following surgery.

Other common shoulder injuries we treat